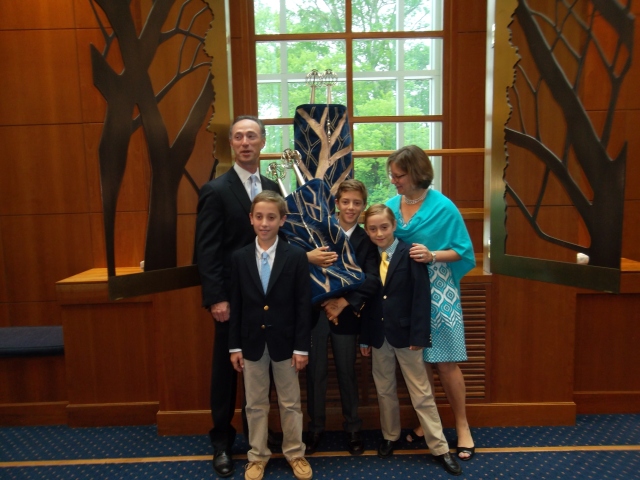 Remarks to son Oscar Fox upon becoming bar mitzvah, May 14, 2016

Oscar, ever since your dad and I brought you home—when your legs were the size of your grandmother’s thumbs—I have been perfecting one aspect of the role of Jewish mother: Worry.

It’s because I love you so much that I worry so much—about trampolines and hoverboards, high fructose corn syrup and bird flu, months without R’s, second-story windows, ladders, lice, screen time, ennui. You name it… Pesticides. Zika. If you need a longer list, ask Jessica Viner, she taught me everything I know about Jewish mothering.

And I admit that along the way I may have worried about how our family would merge two religious traditions.

While I share my worries about trampolines and hoverboards daily, it occurs to me, I have never given you a list of things I don’t worry about. So, here it is:

I don’t worry about your character, your intellect, or your integrity. Not once in this whole bar mitzvah process did I worry that you wouldn’t perform elegantly, eloquently, and in a way that is meaningful to you, your family, and your community.

If I ever did worry about merging two family traditions, I stopped the moment I saw you practicing your haftarah in the Temple library while wearing a Sewanee T-shirt. Your grandfather Billy Nelson, for whom you are named, once studied at Sewanee with plans to become an Episcopal priest. Along the way, he also studied Torah and learned to read Hebrew. Friends here today remember seeing your grandfather walk to shul on West End Avenue and recite the Hebrew prayers at their bat mitzvahs. And I’m sure my Dad’s interest in Judaism is in part responsible for the fact that I went out and found a nice Jewish boy.

When I saw you in the Temple library in your Sewanee T-shirt, I saw two family traditions, of scholarship and service, merged seamlessly, confidently, gracefully—in you.

Oscar, I love you so much. I admire what you’ve accomplished, and I look forward to seeing you grow as a son of the Torah, a role model in your family, and a young leader in your community.

But you’re still never getting a hoverboard.