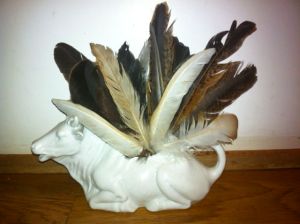 When Rabbi Phil passed our house last week on his way home from shul, I invited him up the driveway to check out the chicken coop. I love to show off the new Ameraucanas and the very prolific double-egg-laying Red Star, and since Rabbi Phil is considering raising quail, he was an eager audience.

Phil Ackerman-Lieberman is one of the brainiest people I know. I don’t often understand what he’s talking about, so I smile and nod a lot.  He is currently working on a publication he calls Jews and Dogs, exploring various traditions and rituals involving canines. I smiled and nodded, then told him about my creative writing project, which I call WASPs and Hens.

As we walked past my small front-yard vegetable patch, our conversation veered toward the subject of the Jubilee Year. Biblically speaking, that’s when people displaced from their land get to come home. Landowners aren’t supposed to plant crops that year. Since the story I’m writing is about farming and homecoming, I’m particularly interested in the language of Leviticus 25 and the Jubilee Year.

In most versions of the Bible that I’ve seen, there is a line about “strangers and sojourners” or “strangers and travelers,” but occasionally I’ve seen reference to “strangers and tenants.” There’s something poetic about that particular translation — an implied impermanence, a tenuousness I want to convey about my characters. That’s the language I want to borrow for my own story, but I’m not sure exactly which version of Leviticus it comes from.

Rabbi Phil offered some suggestions, then we headed back to the chicken coop, where our children were clomping around gathering feathers. His son presented him with a strawberry-blond-and-white plume. Rabbi Phil said, “Thank you. I can use it for work.”

I didn’t say anything, but…really? For work?

I told him he was welcome to take the quill home, but after further inspection, the rabbi deemed it too small and let it fall to the floor of the coop. My strawberry-blond-and-white chicken looked ashamed, crestfallen. Honestly, I felt the same way.

Rabbi Phil, I’m sorry I couldn’t give you something to write with. You sure gave me plenty to write about.